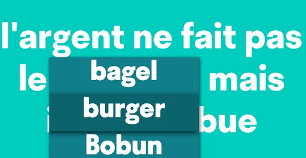 To perfectly encapsulate Deliveroo’s positioning, “passionate about food”, the agency created Deliveroo’s very first interactive campaign at Paris’ Saint Lazare railway station. The concept: inviting the general public to hack and share ‘foodie’ versions of some of France’s most famous common expressions. ‘my makis’ makis are my friends’, ‘money doesn’t make the burger go round’, ‘he who has no sauce has nothing’… An unprecedented dramatisation within the station’s famous collonade with an immersive and ultra-qualitative scenography in the brand’s gourmet and colourful world. A wraparound events display of more than 150m2 within the Grand Panoramique space at Paris’ Saint Lazare railway station. An ad hoc app developed for people to select their favourite French expressions from those on offer before ‘hacking’ them with food references to take away their own interpretation of the campaign.

An interactive experience for the general public at the heart of the dramatisation among the station’s impressive rows of columns, all requiring the development of an ad hoc application

+445,000 passengers reached every day during the campaign

You can find out more about which cookies we are using or switch them off in settings.

This website uses cookies so that we can provide you with the best user experience possible. Cookie information is stored in your browser and performs functions such as recognising you when you return to our website and helping our team to understand which sections of the website you find most interesting and useful.

Strictly Necessary Cookie should be enabled at all times so that we can save your preferences for cookie settings.

If you disable this cookie, we will not be able to save your preferences. This means that every time you visit this website you will need to enable or disable cookies again.